STORIES
You are here: Home1 / STORIES2 / Uncategorized3 / A good time for “Firsts”

There are always leaders and followers, those who take the leap first. We in the real estate industry, and the economic recovery itself, are being lead by a wave of first time home buyers who are critical in the jump start of our market. And with those firsts comes a wave that benefits all price points.

When first time home buyers purchase entry level homes, the entry-level homeowners are able to sell and move-up to mid-level homes, while those sellers sell and ultimately purchase homes in higher priced or luxury arenas. It’s a kind of “trickle up” process that could catapult our market to rebound.

Let’s look at the good news from the National Association of Realtors and the numbers of existing home sales for March: Nationally, prices rose from February to March by 4.2 percent which is much higher than the typical 1.8 percent seasonal increase between those two months.

Housing inventory at the end of March fell 1.6 percent to 3.74 million existing homes available for sale which represents a 9.8 month supply at the current sales pace.

The share of lower priced home sales have trended up, indicating a return of many first-time buyers. Sales in the upper price ranges remain stalled but there are two reasons for this. First, jumbo loans still are difficult to obtain right now—though that may change in the second and third quarters thanks to the government’s work to restore this—and second, now that first time home buyers are once again entering the market.

Another interesting note, the Mortgage Bankers Association this week released its Weekly Mortgage Applications Survey for the week ending April 17. The index showed an increase of 5.3 percent from the previous week and that was a 76.9 percent increase compared with the same week a year ago. Yes, 76.9, that’s not a typo.

Whatever you think about what our government is doing to revive our economy, it seems some of the early work like the first time home buyer tax credit is working. Earlier this week Inman News reported that the preliminary numbers from the IRS suggest 1.4 million taxpayers will claim the federal first-time home buyer tax credit on their 2008 tax returns, meaning the program is likely to meet or exceed the 2 million target set by lawmakers before it ends November 30, 2009.

Finally and I think this is probably most notable, the Wall Street Journal reported this week that prices have fallen back into line with what the typical household can afford to pay in most of the U.S. The report showed that home prices are dubbed “fairly” valued in 202 of the 330 markets studied. That means the average price level is within a band 14% above or below the historical norm. Twenty-one markets are “overvalued” or between 14% and 34% above the norm. And 106 markets are considered “undervalued” or more than 14% below the norm. Take a look at this graph which showcases where we were in the early part of the decade as compared to today: 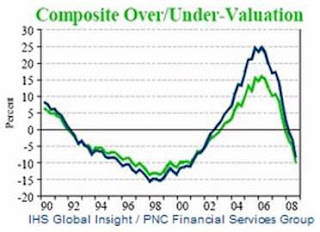 Wondering how the drop in property value a positive thing? Though the ride was nice in the big real estate boom of the early 2000s, we couldn’t sustain those types of record appreciation levels without eliminating certain consumer niches, including first time home buyers. Now that levels are back within range, the first time home buyers are able to reenter the market.

First steps are memorable. Is it time for you to take one?

trace timeUn-wife myself
Scroll to top